Iraqi Detained At JFK Airport Speaks To Press After His Release

Thanks Yota ! Hot damn if they would have listened to what President D.J. Trump had to say maybe they shouldn't have taken that flight ! Finally a man that says what he is going to do ! People you got 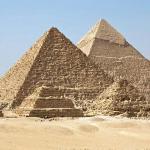 Okay, let's think about this... I've been involved in missionary work most of my life. I love people and I appreciate not only the plaque on the statue of liberty and the diversification of the Americ

Here's a thought... Why not get every private protester to pledge their homes as refuge for at least one refugee, taking FULL guardian responsibility for each as a dependent for five years... ???  No