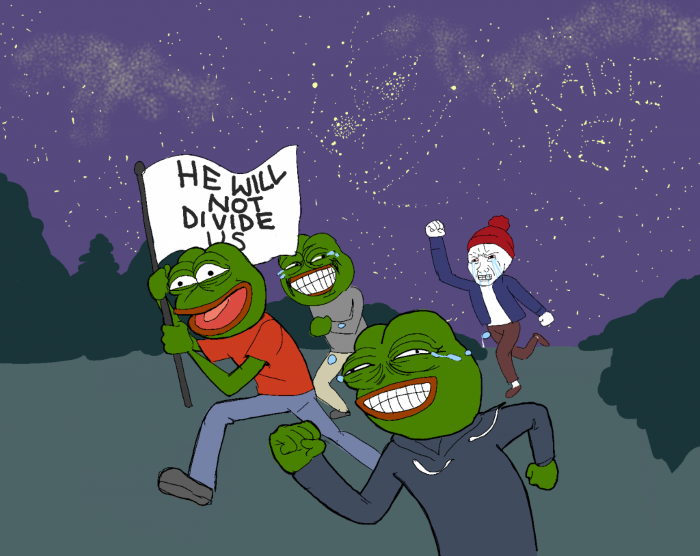 Share
Followers 1
I'm not even sure how to explain this... but it is glorious!  Some Social Justice Warriortard named Shia Labeouf, put up a 24/7/365/4-8 year "art" project to protest Trump called "He will not divide us".  It was a camera set up for Snowflakes to rant and chant!  But it has been trolled mercilessly by Trump supporters and has had to be moved 4 times!

He Will Not Divide Us (HWNDU)

The project — which LaBeouf launched with his frequent performance art collaborators Nastja Sade Ronkko and Luke Turner — began at the Museum of the Moving Image in Queens, New York, with a webcam pointed toward visitors who were encouraged to stare into it and repeat the titular phrase as many times as they wished. The project was to have remained active for President Trump’s entire first term in office.

The museum shut down the project in February, saying the site had attracted groups of protesters and political violence.

LaBeouf and his partners then relocated the project to the outside of a theater in downtown Albuquerque, New Mexico, but that location was also abandoned after reports of gunshots in the area.

Earlier this month, LaBeouf relaunched the live stream with a simple white flag mounted at an undisclosed location. Using flight patterns and constellations, a group of Internet sleuths found the flag and replaced it with Trump’s signature “Make America Great Again” hat.

Following that incident, LaBeouf announced this week that he would move the anti-Trump art project to the UK.

“Events have shown that America is simply not safe enough for this artwork to exist,” LaBeouf, Ronkko and Turner wrote in a statement on the FACT website. “We are proud to be continuing the project at FACT, an arts centre at the heart of the community.”

For the fourth time, Shia Labeouf and co. claimed the “He Will Not Divide Us” stream had found a permanent home—and for the fourth time they were proved wrong.
The Liverpool, UK, location for the protest livestream has been compromised, with members of 4chan’s /pol/ board scaling the roof of the FACT center and attempting to tear down the flag. Labeouf and his artist friends thought the flag was safe on top of a five- story building in a different country, but again they discounted the power of the Internet.