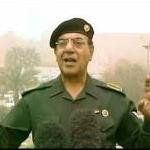 They are going to form countless committees to find out who opened fire on the demonstrators when they know darned well on who did that.  Just anything to stall true monetary reform and laws that will

Al-Maliki: We refuse to fire against demonstrators or topple the government with violence Policy